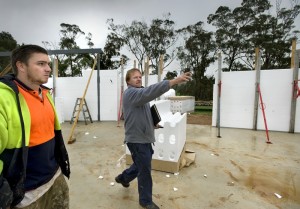 every step of the way”

Since building his own home with ICF in 2000 Tim has been focusing on developing Insulbrick ICFs- ICFs that allow for optimum performance and ease of construction. He has also been concentrating on every aspect of ICF construction and is constantly implementing subtle changes to the system that help improve the overall process. He spends much time giving talks at seminars and TAFES and to industry groups such as Building Surveyors. He also spends much time assisting Owner Builders and Builders on site. He is also the driving force with all the installations applying the same standards he applied on his own home many years ago.

His goal is to see ICF construction not an alternative building system but as a mainstream option- as it is in many countries throughout the world.

If you are considering building with ICF contact Tim. It will be clear the extra yards he will go to support your venture. You can contact Tim on 0414745513 or by email at tim@insulbrick.com.au